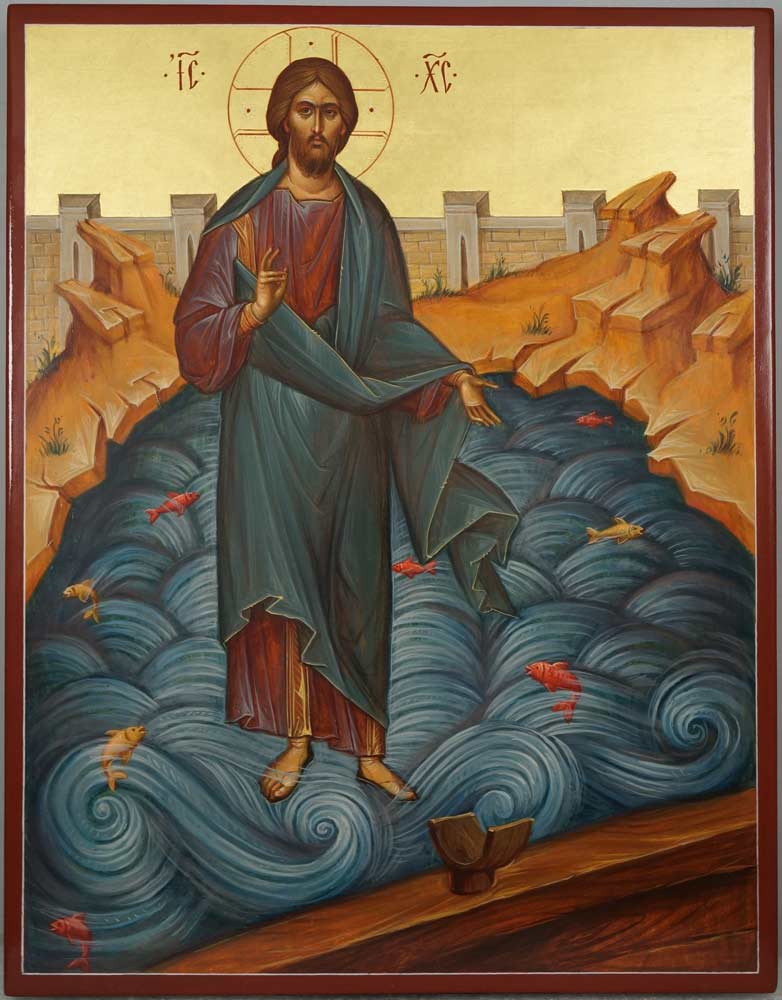 Seeing [The Apostles] straining at the oars, for the wind was against them, at about the fourth watch of the night He came to them, walking on the sea; and He intended to pass by them. But when they saw Him walking on the sea, they supposed that it was a ghost, and cried out; for they all saw Him and were terrified. But immediately He spoke with them and said to them, “Take courage; I Am, do not be afraid.”  Then He got into the boat with them, and the wind stopped; and they were utterly astonished

It is often claimed by Muslims that there is no sense of any divinity in the Synoptic Gospels, but that His deity is only visible in the Gospel of John. This is demonstrably false(1).

One of the most striking accounts in the Gospel of Mark comes in Mark 6, where the Apostles are on the sea, in a storm, and the Lord comes to them, walking on water and then calming the storm.

On surface level, this account has nothing special about it apart from Jesus’ miraculous calming of the storm.

However, let’s dig a bit deeper:

Here I want to argue 3 points that cumulatively strongly point towards His deity:

b – Jesus’ walking on water and “passing by” the Apostles is connected to OT in two contexts where the original application is towards YHWH, the God of Israel.

c – Jesus’ calming the storm is likewise connected to an OT text where the original referent is YHWH.

This is admittedly the most argued-over point, and scholars debate whether Jesus is simply making a self-identification (hey guys, it’s me) or a reference to the divine I Am of Exodus 3 and Isaiah 43-45. At times it is a simple self-identification of the speaker (such as in John 9:9), but at times it may have a double meaning of identification AND a use of the divine I Am (such as in John 18:5-6), and at times it is simply a straightforward and explicit claim to divinity (like John 8:58-59 where the context makes a simple self-identification impossible). Although it is interesting that when YHWH reveals Himself to Moses, He does call Himself I Am. At least in this context there is a connection to revelation of YHWH’s identity as the Existing One.

It is best to see what Jesus meant from the other two points.

This is much more secure discussion, as multiple scholars have noted, Jesus’ walking on water has striking parallels to the Septuagint version of the Old Testament (LXX), especially in the Book of Job, chapter 9.

[YHWH] Who alone has stretched out the heavens, and walks (περιπατέω, peripateo) on the sea as on firm ground.

He came to them, walking (περιπατῶν, peripaton) on the sea…

Two things stand out in the quotation from Job 9:

b –  Both Jesus and YHWH are described as walking on water. It is also noteworthy that in the OT only referent to anyone walking on water is YHWH in the above passage(2). The connection is very striking as it is a uniquely divine prerogative.

Jesus “passing by” the Disciples

If ever He should go beyond me, I shall not see Him: if He should pass by (παρέρχομαι, parerchomai) me, I would not even know.

What strengthens the connection is that the idea of God “passing by” people is in multiple places a sign of a OT theophany.

God intends to pass by (παραἔρχομαι) Moses in Exodus 33:22 and reveal His glory.

This further strengthens the argument as the context in both passage is God revealing Himself, Jesus reveals Himself by using the divine I Am and passing by the Disciples while walking on water.

Finally, Jesus calms the wind in 6:51, a reference connected to the OT is relevant here:

And He commands the storm, and it is calmed into a gentle breeze, and its waves are still.

Then [Jesus] got into the boat with them, and the wind stopped; and they were utterly astonished.

In Psalm 107:29 YHWH calms the wind(4). This is again a unique prerogative of YHWH in the Old Testament, and is not ascribed to any Old Testament prophet.

As additional evidence, it is also interesting to note how the Apostles were scared at seeing Jesus in v. 50 (“they all saw Him and were terrified”), as He intends to pass by them, this is the normative response in the OT when people see God or the mysterious Angel of the Lord, or are in the Presence of God, examples:

Job 23:15: “Therefore, I would be dismayed at His presence; When I consider, I am terrified of Him.”

1 Samuel 4:7: The Philistines were afraid, for they said, “God has come into the camp. Woe to us! For nothing like this has happened before!”

As we have seen above, Mark is in just 3 short verses showing an in-depth connection to Old Testament and very strongly bringing out the divine identity of the Lord Jesus, and the echoes would be unmistakable to the original audience of Mark.

Finally, to wrap up on Jesus’ use of “I Am” in v. 50, here is Richard B. Hays from his Figural Christology and the Fourfold Gospel Witness, p. 68

In this narrative context, there is little doubt that we should also hear Jesus’ comforting address to the disciples (“It is I [ἐγώ εἰμι]; do not be afraid” [6:50]) as an echo of the self-revelatory speech of the God of Abraham, of Isaac, and of Jacob speaking from the burning bush in Exodus 3:14: “I AM WHO I AM” (LXX: ἐγώ εἰμι ὁ ὤν). Thus, when Jesus speaks this same phrase, “I am,” in his sea-crossing epiphany, it serves to underscore the claim of divine identity that is implicitly present in the story as a whole.

Glory to the Life-Giving Trinity now and unto ages of ages!

1. See for example Sigurd Grindheim, Christology in the Synoptic Gospels: God or God’s Servant (2012), Robert Bowman and J. Ed Komoszewski, Putting Jesus In His Place: The Case for the Deity of Christ (2007), Richard Bauckham, Jesus and the God of Israel: God Crucified and Other Essays (2008), Richard B. Hays, Echoes of Scripture in the Gospels (2016), Idem, Reading Backwards: Figural Christology and the Fourfold Gospel Witness (2014), Larry Hurtado, Lord Jesus Christ: Devotion to Jesus in Earliest Christianity (2003)

2. See Patrick J. Madden, Jesus’ Walking on the Sea: An Investigation of the Origin of the Narrative Account, p. 29

3. An additional point here could be made in connection to God’s care for His people in the OT during storms and Jesus’ saying “Have courage” (see for example Isaiah 43:2 “When you pass through the waters, I will be with you) , but I will not elaborate on this in this article.

4. I acknowledge that Mark 4:38-41 is a closer parallel, but the verse does speak of YHWH also calming the wind alongside the storm.